Joplin Dentist Survives Wilderness Encounter by the Skin of His Teeth 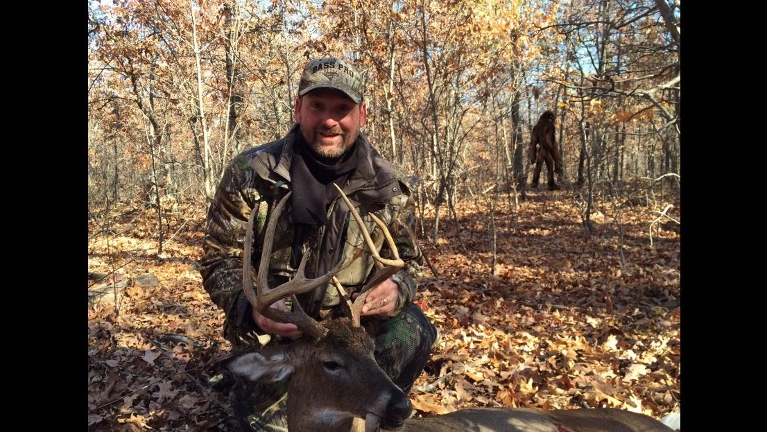 For Dr. Gregory B. Kivett Jr., it seemed like just another successful hunting trip. “I had just taken down a beautiful 8 point buck with my bow. It was a clean hit, he only took a couple steps before falling right over.” Dr. Kivett and his friend Bill (who has asked us not to use his real name) walked over to the buck. Dr. Kivett decided to take a picture with his prize. “I was pumped, you can tell in the picture how happy I was. I had no idea what was about to happen, that’s for sure.”

Unbeknownst to Bill and Dr. Kivett, they were not alone in the forest that day. They were being watched. “Bill must have seen him right after taking the picture because he suddenly looked like someone had done a Zoom teeth whitening treatment on his whole face. The next thing I know, I hear a terrifying roar and a crash of trees. I thought it must have been a bear.”

This was a reasonable assumption on the doctor’s part. Black bears are relatively uncommon but they can be found in Southern Missouri. Unless protecting a cub, black bears will usually charge without physically attacking a person. An avid outdoorsman, Dr. Kivett quickly jumped up and spun around to face the black bear. “I knew that black bears are normally skittish so I was prepared to stand tall and let out a yell, but when I saw what was coming I was so shocked I could not make a sound.” Dr. Kivett was face to face with the legendary Sasquatch (a.k.a. Bigfoot)

Bigfoots are largely solitary creature. They range in size from 6 ft. 6 in – 10 ft. tall and weigh 400 – 1000 lbs. They have been seen all over the United States, though they seem to be most common in the Pacific Northwest. One thing Bigfoot is known for is having a very distinct smell. Dr. Kivett was getting a much closer look at (and smell of) a Bigfoot than anyone would ever want.

“He picked me up and lifted me over his head like I was an 8 year old child. My arms were pinned to my side and there nothing I could do to get away. He pulled me in, the stench was terrible. I could hardly breathe. For some reason I kept thinking about that smell. Then he opened his mouth and it hit me, he did not smell because he needed a bath, it was his breath! He was suffering from severe periodontal disease and abscessed teeth.”

“Well I looked Bigfoot right in the eyes and started talking about his dental needs. I don’t know why, I just saw a mouth that I could help. He had a couple really bad cavities on his molars. I could basically tell without an x-ray he would need a root canal. Then he had one tooth in the upper right that was cracked through to the root. That was going to have to be an extraction. Then, right as I was talking about the LANAP laser and how we could get him fixed up so he would not have to lose any more teeth with little or no discomfort, he dropped me.”

From being held 10 feet off the ground by a Bigfoot with the power to tear him limb from limb to suddenly being thrown to the ground, Dr. Kivett was stunned. “It was a long drop and the breath was knocked out of me, Bill came up to me and asked ‘what the heck was that.’ I had no idea, but I was alive and I had my deer. I was relieved, that’s for sure.” Except for a few bruises Dr. Kivett suffered no injuries. He and Bill quartered the deer and headed for home, confused but no worse for the wear.

Medicine man Eluwilussit is an expert on Sasquatch and to him, the outcome of this encounter is not as surprising as you might think. “Sasquatch is a powerful spirit creature, but he has one weakness, severe dental anxiety caused by bad experiences when he was a little Bigfoot.”

When told of this Dr. Kivett was understanding. “Dental anxiety is a very real problem that can affect anyone, even if they have the strength to throw a Volkswagen Beetle 30 yards. I wish that Sasquatch would have given me a chance. My office sees people with severe dental anxiety all the time and by treating patients with respect and using sedation dentistry as needed, we are able to overcome their fears and get them the dental care they need.” So if Sasquatch is reading this, he has an open invitation to come to Associates of Dental Arts in Joplin MO.