Would You Rather Clean A Toilet or Floss? Survey Looks At How Americans View Flossing 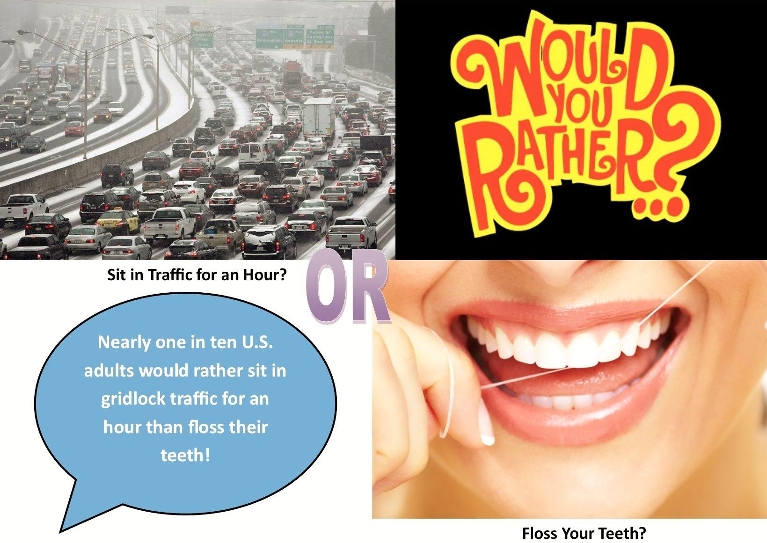 A new national survey released today reveals more than a quarter (27 percent) of U.S. adults admit they lie to their dentist about how often they floss their teeth. Additionally, more than one-third of Americans (36 percent) would rather do an unpleasant activity like cleaning the toilet (14 percent) over daily flossing. Along with brushing teeth twice a day and regular visits to your dentist, daily flossing is a critical component in the prevention of periodontal disease. The survey was conducted online in March by Harris Poll on behalf of the American Academy of Periodontology (AAP) among 2,021 U.S. adults and among the top 10 U.S. markets.

Commonly referred to as gum disease, periodontal disease is a chronic inflammatory disease caused when bacteria in plaque below the gum line lead to swelling, irritation, and possibly receding gums and tooth loss. Periodontal disease has been linked to many chronic diseases, including diabetes, cardiovascular disease, rheumatoid arthritis, Alzheimer’s disease, and even cancer. Despite its prevalence, periodontal disease is hardly ever discussed, resulting in a lack of urgency for people to properly care for their gums.

“There’s clearly more work to be done when it comes to educating Americans about the importance of oral hygiene. There are more than 500 bacterial species that can be found in plaque, and brushing alone does not remove the bacteria that live below the gum line,” says AAP President Joan Otomo-Corgel, DDS, MPH. “The good news about periodontal disease is, with proper and timely care, it’s treatable and often reversible.”

The new survey revealed a list of unpleasant activities Americans would choose over flossing, such as washing a sink full of dirty dishes (18 percent) or waiting in a long check-out line (14 percent). Nearly one in ten U.S. adults would rather sit in gridlock traffic for an hour or do their taxes (9 percent each).

Love The Gums You’re With

The AAP urges all Americans to Love the Gums You’re With and take better care of their gums by adopting simple improvements to their oral hygiene. To aid in the prevention of periodontal disease, the AAP recommends brushing at least twice a day, flossing daily and discussing periodontal health with a dental professional.

The information is from a CHICAGO--(BUSINESS WIRE) press release